Attention: As part of the 2.8 beta updates Ammo, Fuel, and Materials have been merged into a single resource (materials). 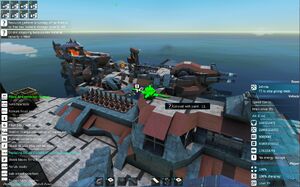 Behind every battle in From the Depths there is an intricate resource gathering and resource processing mechanism at play. This involves harvesting raw materials from hotly contested ‘Resource Zones’, processing them into ammunition, fuel and spare parts and supplying them to the front line war machines. A machine can be built to mine, process and fight but a jack of all trades is a master of none.

There is one type of raw resource called Material. Materials can be easily found in resource zones. In order to gather out of a resource zone, one must have an engine and a resource gatherer(s). As long as one has enough power, the gatherers will automatically collect resources from the zone.

Plans are in motion to implement a ‘tech tree’ where certain game modes (and the single player campaign) may involve processing rare elemental resource into research to unlock better equipment.

A skill tree and trait tree in the character sheet [Z] is in progress. Some skills and traits improve the efficiency of the resource gathering and processing.

Resources are gathered and stored using blocks in the Resources tab. Stored resources such as ammunition and fuel behave as expected, in that they explode violently when destroyed. Be mindful of this when designing your vessels.

Resource Points (RP) is a measure of the overall value of resources. It is used to set limits in story missions and sets experience gain.

Found in resource zones and can be processed into other resources.

Ammo is consumed by all weapon types except Lasers and Particle Cannons.

Battery energy is produced by fuel engines, steam engines and RTGs, and can be turned into power using an electric engine or used directly in Railguns and Particle Cannons.

Fuel is consumed by fuel engines and Custom Jet Engines.

Power is produced by fuel/electric engines, and is consumed by various propulsion systems, lasers, shields, and signal jammers.

and can "store" a maximum amount of resources

. The rate at which a resource zone generates resources depends on its current resources

and these two parameters:

Resource generation is therefore maximized when the current resources reaches 10. This maximum rate is

Extraction is performed by Resource Gatherers and Oil Drills.

These formulas assume continuous gathering. Results in practice may be slightly different as the game operates on discrete updates.

Additionally, there are "Coal Piles". The standard coal-pile is 2x2x1 and stores 1750 material. The large coal pile is 3x2x2 and stores 5250 material. Both provide just 437,5 material per m³, but have higher health than standard material storage.

The Cargo Container can hold 54000 material while only having the size of 3x3x6 giving it the highest material per resource storage density in the game at 1000m³.

Resources from wrecked craft can be picked up within 500m.

Transfer range is 1 m per 100 total storage capacity (including both raw and processed resources), but no less than 100m and no greater than 2000m. Maximum transfer range is therefore reached at 200k storage, or 100 cubic meters of raw storage.

Note: Fuel Refining is not present in the game anymore as of Beta Update 2.8 and has been replaced by mateiral

Material can be refined into fuel by using refineries.

Refineries cannot operate underwater and are more effective at low altitudes and kept vertical. Because of this, they are best placed on fortresses or structures.

Refineries have a maximum part number of 100, excluding the refinery still itself. Because of this, the most efficient refinery consists of 1 Desalter, 8 Cokers, 14 Catalytic Crackers and 77 Flare Stacks, achieving 299.2 efficiency (4 material to 1172 fuel per minute, batch takes 153s). This setup builds up dangerous gas, but stabilises at a gas level of 40, not dealing any damage to the refinery.

be the number of Crackers,

be the number of Cokers,

be the number of Desalters, and

be the altitude of the refinery.

The process time is:

Over each period of about two seconds, Dangerous Gas increases by 0.4 times the efficiency. Tilting the Refinery induces extra Dangerous Gas---up to 20 per period at horizontal or worse.

Dangerous Gas is mitigated by the following:

Flares do not have to be adjacent to the Desalter to benefit; they merely need to be connected to the same Refinery.