They come in 4 sizes: Small, Medium, Large and Huge (S, M, and L). S-class holds 4 missiles per Missile Launcher, and 4 modules per metre length. M holds one missile per launcher, and 2 modules per gantry. L-launchers are 2x2x1, and their gantries contain a single module each. Huge launchers are 2x3x1, and their gantries take up 2m of space per module.

A minimal missile consists of:

For example, this launcher fires a 5m long missile in the direction of the launch pad:

Most of the important info is given when editing a missile. Some notes for optimisation:

All fragments have an AP-value of 6. Each warhead spawns its fragments at its own location, so keeping the warheads near the nose can slightly increase the number of fragments that hit.

The explosion is centered on the average position of all explosive warheads in the missile. Therefore it is advantageous to have the warheads near the front of the missile for a head-on hit.

Underwater missiles have greater explosive damage, to a maximum of 1.5x damage at 5m depth. Explosive radius is also increased to up to ?x, but not exceeding the cap of 30m (information on underwater radius may be obsolete, explosion-algorithm and missiles changed since).

If the missile has a proximity fuse, the explosion instead originates 90% of the way towards the triggering object from the fuse position. This does not affect the underwater damage bonus.

It is possible to use missiles as shield-killer, using EMP. Unlike APS-, and CRAM-shells they pass through shields, delivering a large EMP-payload that can destroy Shield Projectors. It is also possible to use Particle Cannons for that.

All missiles deal thump damage if impacting on a block. The damage dealt depends on impact-speed and modules. AP is 20. One body-module is worth 20 additional normal modules. While the patch notes claim that a thumper head increases damage as much as 1.5 bodies, the UI shows it is counted as one body – Nonetheless, a dedicated thumper-missile will do better with a thumper head, due to the head's lower drag. Bodies and thumper heads have the additional advantage of increasing the missile's health.

Interceptors target hostile missiles. They will distribute all available interceptors to comfortably kill as many missiles as possible, and prioritise missiles larger than themselves. Interceptors trigger when very close to their target, or in range but moving away, and are destroyed when triggering, damaging up to 3 missiles within 15/30m. Should they miss, or should the target be destroyed, the interceptor will acquire a new target.

Missile interceptors are not available for large missiles.

HE warheads do not damage hostile missiles, even if placed on an interceptor, though they did in the past.

Very manoeuvrable vessels may be able to dodge missiles, though this is less reliable than outrunning them.

IR seeking missiles can be decoyed with flares or diverted to unimportant places with Heat Decoys.

Missile Laser Emitters can't lock onto vehicles surrounded by smoke generated by Smoke Dispensers or smoke shells, so Laser Designated missiles have difficulties hitting vehicles in the presence of smoke. Laser Beam Riding missiles do not require a lock, only a direction, and hence have no such difficulty.

Missile health is given by the UI when editing the missile. Larger missiles (both class and length) have more HP, and thumper heads, bodies, and using internal space for reinforcement further increase this. Their armour-class is 1, meaning 2 AP is enough to deal full damage.

Missile Interceptors, Laser Munition Defences, and weapons controlled by Anti Missile Cannon Controllers can destroy hostile missiles, once they have been detected.

Detection range is listed by the UI. It depends on a missile's class, length, and thrust. As a rule of thumb, it can be assumed that S-missiles spend roughly one second within detection-range, M-missiles about 2-4s, and L-missiles upwards of 5s.

Do note that an active radar seeker is detectable from much further away by Passive Radars.

All ranges in metres. Only applies above water. If the powered detection range is smaller than the unpowered one, the unpowered range will be used.

Below-water, only Passive Sonars can be used to detect missiles. All ranges in metres. Only applies below water.

Considerations when letting an AI use missiles:

This is not intended as a complete list, but rather to show some of the most basic types of missiles. Feel free to experiment, and/or create a separate page with more pre-made designs, which you can then link here. 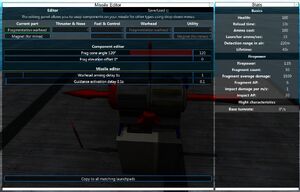 This gives us two modules. 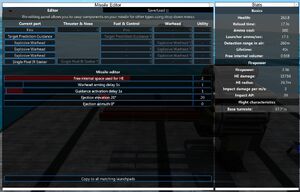 This gives us six modules. As a bomb, best if faced horizontally. As a grenade, you must use ejectors to achieve sufficient speed. 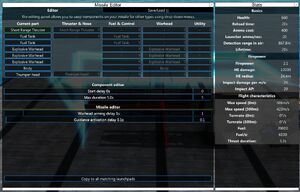 This gives us eight modules. Must be turreted using a Two Axis Turret, or the entire craft must aim accurately with its hull. Due to the high speed and health, rockets may have more success piercing enemy active defences (like LAMS or CIWS). 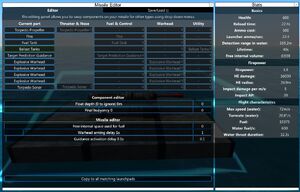 This gives us ten modules. Best if facing roughly towards the enemy (+/- 90°). 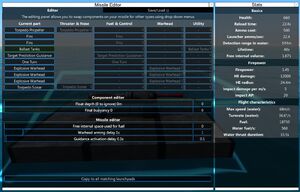 Variant with a one-turn and more agility – This will allow the torpedo to be launched from almost any orientation, and is more likely to hit agile targets: 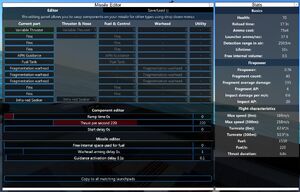 This gives us twelve modules. 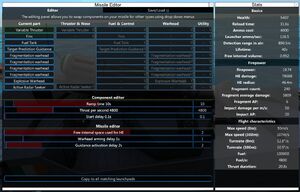 This gives us ten modules. If scaling it down, remember that the lifetime of missiles is limited, and you may need either greater speed or a regulator to achieve the desired range using smaller classes.

Using more HE would likely deal overkill-damage, and exceed the radius-cap of 30m even more.

Exceeding an effective range of about 2km is usually not necessary, as no faction-craft is allowed to have an intended range greater than that – You will only encounter ranges above 2km if you choose to do so, or if a crippled craft is unable to close distance. 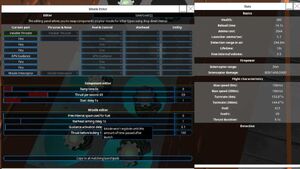 This configuration allows for 8 slots, which is actually more than needed but also allows for faster turning

This vertical launch interceptor is primarily used for close-medium ranges as the 5 fin modules and the activation delay on the thruster allows for a very small turning circle.

Engine thrust where fuel and lifetime depleted in same time[]