Most damage is subject to armour mechanics. Unless stated otherwise, damage is multiplied by

Against explosive or kinetic damage, "structural" blocks (namely wood, stone, metal, heavy armour, and alloy) behind a block being damaged will contribute 20% of its armour to the AC of the block being hit.

Kinetic damage is dealt by fragmentation warheads, CRAM cannons, and advanced cannons. The amount of damage dealt depends on the impact angle.

When striking from outside (i.e. not just having destroyed the previous block in its path), kinetic damage is reduced to a factor

. If the projectile fails to destroy the initial block, it has a chance of ricocheting of

. If the projectile does not ricochet, the remaining damage potential is reduced by the net damage dealt divided by

For the various slopes:

Thump damage is dealt by:

Laser damage is dealt by lasers.

Explosive damage is dealt by CRAMs with HE-pellets, Advanced Cannons or Missiles with HE-, or flak-warheads, by explosive PACs and by exploding blocks.

Explosions cannot affect anything more than 30 metres from their origin, even if their rated radius is larger. However, if a vehicle is outside the 30m radius, but still inside the listed radius, the explosion will "snap" to the vehicle, damaging blocks within 30m from the closest point. This matters little for HE, but is quite noticeable on flak-shells.

The exact calculations for explosions are quite complex. If an explosion propagates through air, it will lose power. If it lacks power to deal meaningful damage to a block, it may do no damage, getting part of its power refunded. In effect, this means that explosions deal more damage in closed rooms (strengthening APHE), and will seek out weak spots in armour (making exposed vitals quite vulnerable).

Explosions take subobjects (turrets, spinners, pistons) and the main construct (hull) into account. Blocks will block explosions as follows, regardless of whether they're placed on the hull or a subobject: 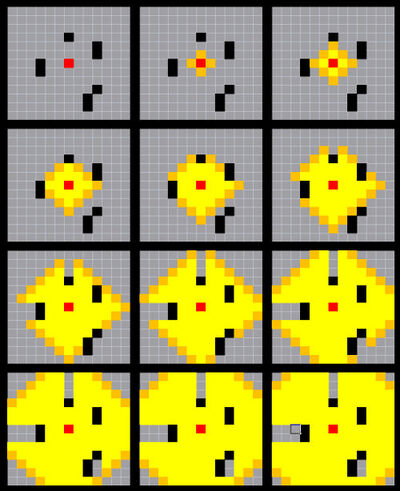 EMP damage is not subject to reduction from armor.

When a construct is hit by EMP damage, a charge is created with damage potential equal to the rated damage. The charge propagates from block to block. The effect happens instantly contrary to the visual. Upon visiting a block:

The pathfinding algorithm operates similarly to Dijikstra's algorithm, but instead of choosing the node (block) with the shortest total path at each iteration, it chooses the node which maximizes the amount of total damage dealt minus the amount of total damage lost to protective drainage on the path to that node. The search terminates after the charge used (damage dealt + protective drainage) reaches 1.2 times the original damage potential, or no more nodes are reachable. At this point the visited node with the highest damage dealt on the path to that node is chosen. Surge Protectors count as taking full damage for purposes of the propagation decision. The path of EMP prioritizes targets with the least drainage on the path to them first. This along with EMP being unable to visit a block twice sometimes causes the charge to hit a dead end, loosing the charge, despite a more damaging path being available. EMP can still travel through destroyed blocks and paths around wood/stone despite not actually receiving the drainage on crossing it.

Update 3.3.10 changed the algorithm such that the maximum blocks searched scales with damage, starting at 500 blocks and adding 1 per every 10 emp damage. In addition, the protective drainage and susceptibility of many blocks were changed, most notably Heavy Armor no longer receiving any EMP damage at all.