From From the Depths Wiki
Jump to: navigation, search 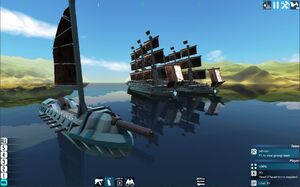 a small battle taking place, a decent example of combat

The various vehicles, fortress, and structure mounted weapons in From the Depths can all be individually controlled, controlled through fire control computers, or controlled by a vehicle AI through a Local Weapon Controller placed near the weapon.

Manual firing is as simple as looking towards your target (and adjusting for distance and velocity) and hitting fire. You can choose what weapons you want to fire by assigning them to weapon slots. The heads up display will show you exactly how many weapons of each type “can fire”, “can aim”, “cannot aim”, and are “are in a different control quadrant”. You can easily flick between missiles, torpedoes, lasers, cannons, or any combination.

From the Depths truly shines when vehicles have an AI set up to drive the vehicle and control the weapons. This allows vehicles to have many different weapons and allows the player to bring several vehicles to a battle. With the AI doing most of the work, the player can be more strategic and enjoy the widespread destruction during the battle. The player can take manual control whenever they want if the AI is not working correctly.

Damage is totally localized and each block behaves differently- some are armored, some explode when destroyed. Losing a vital component of your vehicle can mean life or death so protecting your ammunition, engines, AI mainframe, and fuel tanks with armor is recommended. Blocks turn into debris when destroyed. If you knock out a crucial block, for example a block in a mast, the disconnected blocks will all fall off. You can literally blow a vehicle in half!

When designing vehicle armor, take into account the advanced ballistic mechanics in From the Depths. Rounds hitting a shield or block at an angle are less likely to penetrate. Explosive rounds are useful against blocks with low armor, such as wood or light weight alloy.

Battles will be fierce and unforgiving but there are many ways of repairing (or completely rebuilding) your constructs to their original state completely automatically, such as Repair Bots and Repair Tentacles (block based) and your character’s repair arm utility.

Autoscrapping avoids tedious endings to battles. For example, a vehicle below 55% health is almost always completely disabled and the enemy would just be shooting at a pile of blocks. A vehicle that has sunk and is below 80% health is usually disabled and vehicles deep underwater are hard to destroy without torpedoes or specialized advanced cannons.

A construct is in danger of being autoscrapped if it has been more than 10 seconds since it spawned and any of the following is true:

Constructs not belonging to the player faction are also in danger of being autoscrapped if any of the following is true:

Reaching one of the above conditions starts a 10 second countdown. If the construct is being repaired, the countdown is lengthened to 100 seconds ("sustained by repairs"). Once the countdown expires the construct will start being autoscrapped; at this point the process cannot be stopped or reversed.